While outwardly cold and indifferent towards people unfamiliar with him, Yuuya is a brave soldier and has a great of camaderie with those whom he works closely with, and would not hesitate to put his life on the line for something he believes in. His pride, however, sometimes causes him to leap into action first before ascertaining the situation, and prior to his deployment at Yukon Base, Yuuya had trouble admitting when he was wrong, in part due to his pride; this resulted in several incidents where he fought with other pilots because of a perceived slight.

Despite his lack of actual combat experience, as a 2nd Lieutenant of the US Army, Yuuya is fairly skilled; his role as a test pilot means that he has gained a wealth of experience in putting TSF through their paces and pushing them to their limit. He has also trained extensively in US combat doctrine, which includes numerous TSF-vs.-TSF scenarios, and with his recent involvement in the XFJ Program, gained a significant amount of knowledge on melee combat as well.

His Japanese name would likely be Takamura Yuuya (篁 祐弥) .

The son of a Japanese man and an American woman, Yuuya enjoyed a relatively normal childhood until his father's abandonment of his family caused the relatives on his mother's side to shun him. That, combined with the racism he experienced as a child, and exacerbated by the issue of his father's disappearance, caused him to develop a complex against his Japanese heritage, believing it to be the cause of his weakness.

Sometime before the events of Total Eclipse, Yuuya joined the US military as a TSF pilot. He obtained the position of a test pilot through hard work, but his arrogance and cold attitude towards others caused some to ostracize him and others to ignore him. In particular, he became rivals with Leon Kuze, whom he met when he joined the US Army's test pilot corps as part of the 414th Ghosts, and later started going out with Sharon Heim, whom he also presumably met at around this time.

Assigned to test-pilot the F-22A Raptor EMD Phase as Ghost-2 of the test flight, Yuuya's recklessness and stubborness eventually resulted in the death of his superior, Captain Rick Sven, when his harsh maneuvering of the Raptor EMD Phase during a canyon run caused a rockslide to hit Rick's Strike Eagle, which was acting as his chaser unit. This accident hardened him somewhat, and despite being cleared of all charges by the board of inquiry regarding the accident, he resolved to rise as high as he could in the military in order to let as many people know of his mistake, so that they could avoid another accident like his. His relationship, especially with Leon, soured further at this point, with Leon refusing to forgive Yuuya. When Yuuya left the test unit, he also broke up with Sharon. His mother later died of disease, leaving him with only his title as a test pilot. Throughout all these years, the only constant friend he had was Vincent Lowell, a TSF mechanic.

Assigned to the Yukon Base on 2nd May, 2001, Yuuya life began to change when he is assigned to Argos Test Flight, with the callsign of Argos-1. While his performance in mock combat earned him the respect of most of his flightmates, his complex against the Japanese resulted in much bad blood between XFJ Program chief developer Takamura Yui and him; Yui believed him to be unskilled and too arrogant to accept criticism, while Yuuya's complex against all things Japanese made him think of Japanese TSFs, and Yui's demands, as flawed. Despite his bad interaction with Yui however, he managed to make friends with Inia Sestina of Idol Test Flight, although Cryska Barchenowa of the same unit remained wary of him.

After a piloting stint in a Type-97 Fubuki, followed by several training sessions in the XFJ-01a Shiranui Second Phase 1, and with Vincent Lowell talking things through with him, Yuuya began to get the hang of piloting TSFs designed around a different philosophy, enough for him to hold his own and overpower Yui when she attempted to take on Argos in an unplanned combat exercise, and more importantly, for him to begin reconciling with his Japanese heritage. While trapped on an abandoned islet in the Caribbean Sea, his relationship with Yui and Cryska improved, in part due to the situation, and also due to his own kindness.

As the testing of the Shiranui Second Phase 1 continued, Yuuya was deployed to the Kamchatka Peninsula for a series of military exercises. There, he met Soviet Union Lt. Colonel Fikatsia Latrova, who taught him that sometimes in life, it is better to pick the most important things to save, than to try and rescue everything. He aquitted himself in live combat against the BETA when he achieved the highest killcount in a single battle with the Empire of Japan's EML-99X, which was also sent there for test-firing, and once again when he almost singlehandedly fought through a horde of BETA attacking the Soviets' ц-04 Frontline Supply Base in order to retrieve the EML-99X's black box. Rescuing Yui, he transferred her to Stella Bremer's Strike Eagle, but was unable to escape the base due to accumulated damage to the Shiranui Second Phase 1's frame, and would have been overwhelmed by the BETA if Latrova had not arrived in time to rescue him. News of Zhar Batal'on's destruction would weigh heavily on his mind in the days after the ц-04 Frontline Supply Base Incident.

With the experience in Kamchatka, Yuuya returned to Yukon as a more mature person. The development of the Shiranui Second Phase 1 into the Shiranui Second Phase 2, and his acceptance of his Japanese heritage, allowed Yuuya to easily defeat Lieutenant Cui Yifei of Bao-Feng Test Flight in the Blue Flag exercises, earning him her respect and affections. 2nd Lieutenant Cryska Barchenowa also began to openly approach her feelings for him at this point, resulting in several social incidences when the pilots were given free time off from Blue Flag. The changes in his attitude was also apparent to Leon and Sharon, who had come to Yukon Base as part of the Infinities Test Flight.

However, these faded into the background with the sudden occurence of the Yukon Base Incident, and Yuuya found himself fighting for both his life, country, and friends in a desperate battle to prevent the chaos created by the RLF and Christopher from getting out of hand. Despite the uphill battle, Yuuya proved himself more than capable of handling the the odds in combat, and was also responsible for several sound tactical decisions that helped his allies re-arm and resupply safely, as well as to retake the base from the clutches of the RLF.

As of 22nd September, 2001, with the XFJ Program on hold due to the incident, Yuuya is left back in Yukon Base, awaiting the restart of the project.

During Operation Ouka, Yuuya piloted the Shiranui Second Phase 3 along with Inia, and acted as Storm Vanguard 1 of the reconstituted Zhar Battalion during their attack on the Evensk Hive.

A young Yuuya together with his mother, Mira Bridges.

Yuuya Bridges walking towards the Su-47E at the end of the Muv-Luv Alternative Total Eclipse PVs.

Yuuya as he appears in the Total Eclipse anime.

Yuuya Bridges in a US Army Fortified Suit. 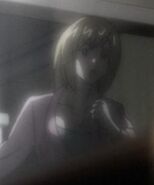 Yuuya and Cryska, reenacting their favorite scene from Gundam SEED.
Add a photo to this gallery
Retrieved from "https://muvluv.fandom.com/wiki/Yuuya_Bridges?oldid=45766"
Community content is available under CC-BY-SA unless otherwise noted.