Kasumi is a mysterious girl living in Yokohama base under Kouzuki Yuuko's care, whom Shirogane Takeru meets one day when he accidentally stumbles into the room with the glowing cylinder while looking for Yuuko. He notices that she wears a different uniform with a different patch on it, and is timid and even a little creepy - he is surprised when she seems to adopt some of Sumika's previous mannerisms, such as starting her own routine of coming into his room to wake him up every morning. She gradually develops a friendship with him over the course of the game, and what little information about her Takeru can get seems to indicate she is extremely central to Alternative IV. Outside of that, she is a walking enigma for the entirety of the game.

After the activation of Alternative V, when Takeru tries to persuade her to board the shuttle as part of the migrant fleet, she wraps her arms around the cylinder and says some downright bizarre things about how leaving will cause her to "lose herself." She refers to him as "Takeru-chan" during this exchange, causing him to wonder why she seems so closely linked to Sumika, who doesn't even seem to exist in this world. Eventually, she reluctantly agrees to leave Yokohama base behind.

Kasumi is still in the cylinder room across from Yuuko's office, and Takeru goes to visit her in this world, as well. Her reactions are different from the first time Takeru interacted with her in the previous world, but the bond they forge is much stronger than it was before, even though he knows he is simply another stranger to her.

During Alternative, more about Kasumi's history and abilities comes to light. She is a product of the Alternative III project, a human created from an artificial womb with ESP abilities intended to read the thoughts of the BETA directly. Even among her brothers and sisters, Kasumi had exceptionally high abilities. Although they were bred with the intention of going directly into the BETA hives to get readings, the plan switched over to Alternative IV before she could be sent out, and was taken in by Yuuko to assist with the project using her unique abilities to read from and project thoughts onto the minds of others. She describes her relationship with the professor as somewhat impersonal, that Yuuko does not fear or hate her, and she experiences only "interest and disinterest."

Kasumi's role in Alternative IV was to communicate with the candidate for the 00 Unit retrieved from Yokohama hive, the still-living brain in the BETA cylinder. She was unable to read much but what she described as "halations" for a long time, images with no distinct meaning; finally, she gleaned the name Kagami Sumika off of her, and began to bond with her from inside the cylinder. Kasumi is also a central part of Yuuko's experiments in sending Takeru back to his world, with the tiring task of "observing" him while he is in the other world, which entails her capturing the memory of him and maintaining it so that he has a safety net for returning to the Alternative world. To do this, she uses drawing as her means of concentrating, sketching him over and over again in a desperate attempt to remember him, eventually for up to hours and days at a time.

Because she was artificially conceived, with no parents to call her own, and even feared among her own siblings, Kasumi is somewhat of an empty void of memories. Having seen both the fragmented memories of Sumika, and Takeru's clear and matching memories, she adopts them as her own, unable to help her own loneliness. After Yuuko reveals the truth about her to Takeru, Kasumi is ashamed and horrified, until Takeru promises that he'll make fun memories with her that will be all her own someday. In the meantime, he gives her a conch shell as a present, telling her he'll take her to the beach someday.

As Alternative IV progresses, and Kasumi assists with the tuning of the 00 Unit, it becomes clear just how close she and Sumika are, and have been since she first communicated with her as a mere brain. She considers Sumika and Takeru her only friends, and sincerely wishes for Sumika to be able to be with him again, and that Takeru will return her feelings. Takeru later thanks her for having been her friend while no one else could have, and reassures her through a period of feeling useless, as she is unable to pilot a TSF; it is something only she is able to do, even if she can't fight, and they're both grateful for her help and caring.

After Operation Ouka is completed, Kasumi explains the final piece of the puzzle that had been trapping Takeru in a time loop in this parallel world, and how Sumika had been at the root of it all. With her death just after the destruction of the Original Hive, the loop stopped, and he ceased to be a causality conductor. As he returns home to his world and Kasumi bids him goodbye, she mentions that she will always observe him no matter what world he's in, suggesting that she is the only one, with the possible exception of Yuuko, who remembers Takeru after he leaves the world of Alternative. (In this same scene, if Meiya is the "runner-up" girl at the end of the game, instead of a final letter, there are a few extra lines from Kasumi as Takeru departs, in which she admits she loved him, too.)

In Final Extra, she still seems to remember the events of Alternative, causing her to burst into tears upon meeting a clueless Takeru in Hakuryou's class 2-B...

From somewhat humble beginnings, Kasumi rose in prominence, and by 2049, Kasumi presided over Earth as the Union of Mankind's first superintendent. Advancements in genetic engineering allowed her and many others to retain their youth. 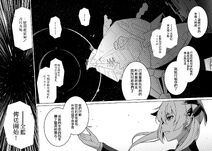 Add a photo to this gallery

"Did you lie just now, Shirogane-san?" 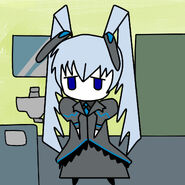 Post-Ouka, with Kasumi on the right and Inia on the left.

Early Days (Inia Sestina can be seen in the background) 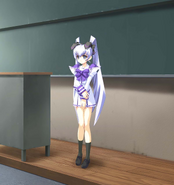 Add a photo to this gallery
Retrieved from "https://muvluv.fandom.com/wiki/Yashiro_Kasumi?oldid=46599"
Community content is available under CC-BY-SA unless otherwise noted.