Wilbert D. Collins, nicknamed "Will", is the main character of The Day After Episode 00. A veteran US pilot and a survivor of the events of The Day, the American-born-and-bred Will possesses a logical and pragmatic mindset both in and out of combat. He is a bit slower to the uptake when it comes to matters involving members of the opposite sex, and his straight-laced attitude leaves him open to easy ribbing by his CO, Daryl A. McManus, and by shrewder personalities, like Melvina Vidya Advani.

All in all, a "sensible protagonist"-tier person, who is, unfortunately, trapped in a universe where the characters are only split into "alive" or "dead" tier.

Prior to the events of The Day, Will had served on board the USS George Washington, in the vicinity of Yankee Station, the Philippines, South East Asia, running attacks on the BETA from offshore. Sometime later, a while before the start of Operation Babylon, Will, and the US Marine Corps TSF squadron, VMF-318 Black Knives, were transferred to Yokosuka Naval Base.

The Black Knives were later detailed as a support unit for an infantry platoon from the 3rd Marine Regiment, and were picked up the USS John F. Kennedy and its accompanying CSG (Carrier Strike Group) in the aftermaths of Operation Babylon from Yokohama Base. They were on board the carrier, bound for Hawaii, when the Grand Ocean Collapse occurred; Will managed to survive the resulting chaos of the roiling oceans and the damage dealt to the carrier, becoming one of two members of the Black Knives to survive, the other being Lieutenant Daryl A. McManus; his wingman, 2nd Lieutenant Leonard van Gogh, did not.

With the USS John F. Kennedy forced aground on the salt plains, the crew of the carrier were forced to hold their location while attempting to contact the American mainland for aid. Joined in due time by the USS Gettysburg, the USS King, the HMAS Sydney, and the USS Gopher State, the beached carrier and the area around it was named the John F. Kennedy Naval Garrison Base, and Will, along with US Navy TSF Squadron VF-133 Raging Busters, were incorporated into its defense plans.

Wilbert, along with Lieutenant Daryl A. McManus, the acting CO of Black Knives, later rescued fellow Marine Corps pilot 2nd Lieutenant Lilia Kjellberg, who was separated from her own unit, from her stranded lifeboat during a mission on the salt plains to deploy signal relays. With Lilia's hurried integration into the Black Knives, Will is assigned as her wingmate and closest contact; Wilbert, however, looks on her obsession with finding her lost squadron members with disapproval, as he believed that setting up the radio boosters and establishing contact with the USA was more important than wasting precious fuel on airborne searches. However, with the implementation of Operation Flying Boom, orders from Daryl, and later backed up by on-the-fly fuel calculations by Lilia, he allows her to take to the skies to canvass the area for distress signal emissions.

While Lilia does find her squadron members due to a beacon, they were long dead from dehydration. Will tried to justify the situation in order to head off Lilia's depression, however, she disagreed with his thoughts, igniting yet another argument. Later, upon Lilia's insistence, a funeral ceremony is held on the USS John F. Kennedy to coincide with Memorial Day. While Will was initially against it, as it used up more resources rather than being permanently kept in cryogenic condition within the ship, Commodore Alston approved the move, and Will later noted that the effect of the memorial service had worked in helping the crew to move on emotionally, telling Lilia that she made the right decision.

A BETA attack, detected by the JFK Naval Base Garrison when they managed to re-establish a link with a satellite passing overhead, cut short Will and Lilia's conversation with a scramble order. Despite the best efforts of both the Black Knives, Raging Busters, the USS Gettysburg and the HMAS Sydney, the carrier is overrun, the warships sunk, and Lilia is ordered to escape the battlezone with confidential data from the John F. Kennedy regarding Operation Babylon. While Wilbert was given the chance to escape, he refused, citing Jump Unit damage to his TSF as the primary reason. In actual fact, he had decided to make his last stand on the John F. Kennedy, alongside Lieutenant Daryl, and both of them are last seen by Lilia fighting off the BETA as they overrun the carrier.

Will reappears during the assault on the JFK Hive, as one of the many members of the crew of the former naval garrison that had been partially preserved by the BETA. 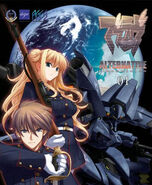 Add a photo to this gallery
Retrieved from "https://muvluv.fandom.com/wiki/Wilbert_D._Collins?oldid=43451"
Community content is available under CC-BY-SA unless otherwise noted.