Tomoe Yukino is a side character appearing in the Muv-Luv series, and is always seen as a trio with Ebisu Minagi and Kamiyo Tatsumi. Her roles throughout the various Muv-Luv series remains largely the same, although her personality and skills varies from game to game; she is far more competent in Muv-Luv Unlimited and Alternative than she was in Muv-Luv Extra.

In the event of an emergency, Yukino's hair can be used to puncture soft materials.

A maid of the Mitsurugi household, Tomoe is committed to serving the wishes of Mitsurugi Meiya. Her frequent screw-ups with Ebisu Minagi and Kamiyo Tatsumi, however, often results in her being the receiving end of Tsukuyomi Mana's ire.

Now a samurai of the Imperial Royal Guard, Yukino is, overall, a far more compenent and serious person, and displays the same dignified (and stiff) attitude expected of Royal Guard pilots. As with her Extraverse self, Yukino serves under Mana, alongside Ebisu Minagi and Kamiyo Tatsumi, and is a member of the 19th Independent Guard Flight.

Yukino remains as her Unlimited self, and actively participates in most of the operations that the 207th Training Unit and STF A-01 are involved in, either as a representative, or else a member of any present Royal Guard forces. She later gives her Type-00A to the remaining members of A-01 for the duration of Operation Ouka.

While she survived the events of Muv-Luv Alternative, it remains unknown what occured to her afterwards.

Tomoe Yukino returns in The Day After, and is still a bodyguard for the Shogun, alongside Ebisu Minagi and Kamiyo Tatsumi. However, all three of them are now under the command of Tsukuyomi Maya.

True to her duty as a bodyguard, she protected the Shogun from enemy assailants during the Seattle Food Plant Hijack, and was present alongside her comrades, during the end of the 8th Border War, to force the French/Canadian forces to a ceasefire.

Her duties remain unchanged, and as proven by the kidnapping of Tatsunami Hibiki from his own barracks, her competence as well. 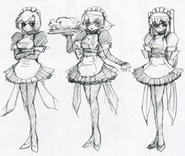 Original art of the Three Stooges.
Add a photo to this gallery
Retrieved from "https://muvluv.fandom.com/wiki/Tomoe_Yukino?oldid=40259"
Community content is available under CC-BY-SA unless otherwise noted.