Suzumiya Akane is one of the side heroines in Kimi ga Nozomu Eien. She is the female lead in the fan-disk Akane Maniax, prequel to Muv-Luv Extra. She is the younger sister of Suzumiya Haruka.

Akane has a really close relationship with her older sister and she also likes Narumi Takayuki when her sister introduces him as her boyfriend, whom he treats as an older brother. She is a really good swimmer and she idolizes Hayase Mitsuki because she is the top swimmer of her school. When she finds out that Mitsuki and Takayuki started dating while her sister is in a coma after getting involved in a car accident she develops an intense hatred towards Mitsuki. There are hints given that Akane feels something more for Takayuki, but these are not explored fully in the anime.

In Muv-Luv Extra Akane is a student in class 3-D and she is a friendly rival to Sakaki Chizuru. She is part of the school's swimming team and one of the more popular students. Akane acts as the leader of lacrosse team of class 3-D and because of that she plays an important role in a couple of the game's routes.

Akane is one of the two last surviving member of training squad 207A, the other being Kashiwagi Haruko. She holds the rank of 2nd Lieutenant and she is a member Flight C of the Special Task Force A-01 9th Squadron (callsign Valkyrie-5). Her position is Gun Sweeper but she wishes to become Storm Vanguard One due to her desire to protect her elder sister and her idol, Hayase Mitsuki. Her relationship with Mitsuki is the same as in the beginning of Kimi ga Nozomu Eien though the reason she admires her is for her piloting prowess. During the defence of Yokohama base after Operation 21st she gets injured after learning about her sister's death. Unlike the other of the members of the Valkyries that were injured in this operation and had to be hospitalized, she didn't have to. Her injuries still prevented her from getting deployed in Operation Ouka but she saw the remaining members of her unit taking off to destroy the Primary Objective.

After the Alternative IV forces are dissolved, the surviving Valkyries are transferred from UN to IJMDF service. Akane is reassigned to the 11th Squadron Skuld of the Fuji Tactical Fighter Training Group and eventually earns the rank of a 1st Lieutenant (callsign Skuld-1) and she participates in Operation Sledgehammer to capture Objective 20. During this operation she demonstrates the capabilities of the Shiranui Second, equipped with XM3 OS and armed with the new Type-02 Squad Support Gun, by moving from one side of the Hive to another via maneuvering not just through the drifts and halls, but by actually crossing the Hive's Main Shaft (a feat never before attempted due to Laser-class firing from below and annihilating anything that entered the shaft), in order to provide fire support to allied forces which had been cut off and were in danger of being wiped out by lasers. This was made possible only because of the data the 00 Unit had recorded in 2001 during Operation 21st which, due to the top secret nature of the 00 Unit itself, is now named 'the Valkyrie data' and the collection is attributed to the former special operations squadron of the same name. Following this operation, she joins the rest of the remaining members of the Valkyries, now part of the same squadron of the Fuji Tactical Fighter Training Group and joined by the late Cpt. Isumi's sister (with whom she has a friendly rivalry), in the operation to retake the Blagoveshchensk Hive.

She has a similar role like the one she had in Extra. She first appears as a member Kouzuki Yuuko's airsoft team and later reappears during the vacation in the tropical island. She is good friends with Tsukiji Tae. 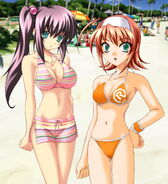 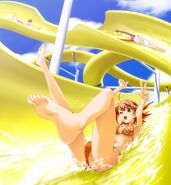 Akane, in her anime debut.
Add a photo to this gallery
Retrieved from "https://muvluv.fandom.com/wiki/Suzumiya_Akane?oldid=46049"
Community content is available under CC-BY-SA unless otherwise noted.