Sakaki Chizuru is one of the main heroines of Muv-Luv and Muv-Luv Alternative. She has also made appearance in Muv-Luv Supplement and Muv-Luv Altered Fable. Chizuru's recurring feature in every series is that she is in a position with authority (class president, platoon commander, etc) and take everything she does very seriously. She is good friends with Suzumiya Akane and has a bad relationship with Ayamine Kei.

The class representative for Takeru's class and usually repremends him in class for his behavior. The former captain of the lacross club. She has a bad relationship with her mother due to a troubled childhood caused by her.

In her and Ayamine's route, during the sport festival, she will accidentally knock Akane in the head with the lacross stick ending the match abruptly and becomes the target of her classmates' harassment.

She works as a junior middle school teacher in 2016, she is strict to her students. (From Strike Frontier)

I'm sure you'd hate a letter full of formalities.

So I'll write down my honest feelings.

First, I apologize for when I pressured you to write a will.

Given your way of thinking, it couldn't have felt right, especially coming from someone who didn't want to write one herself.

But I still wanted to tell you how thankful I was.

It's been a little over two months since I met you.

But you've taught me so many things I can't sum them up all at once.

You did everything better than average and had an excellent mind. I couldn't help but trust you.

On the other hand, I left my leadership position after being commissioned, and talking to our commanding officers has made me realize how narrow-minded I was.

I even felt relieved at not being the leader of a unit anymore.

Originally I wanted to fight for that position, but when it happened I felt calm.

So when I was ordered to act as the unit commander during Operation Cherry Blossom, I honestly felt like the pressure was going to crush me.

But if I ran away from it, then I'd be turning by backs on you and everyone in this unit who helped me grow.

Now that I think that, I'll put everything I have into it, in order to improve myself.

My only regret is that by the time you read this letter, I'll have already died in battle.

It's very unfortunate that I won't get to hear what you think of it.

Sgt. Jinguuji and Capt. Isumi will probably give me an earful, so if you feel like it, please visit the cherry trees at the front gate.

Please forgive me for being cowardly, selfish and weak enough to write this.

Even after I learned about Kagami, I was never able to get over you.

I pray that you and Kagami find happiness.

GLASSES IN THE SHOWER 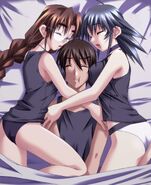 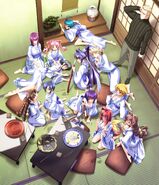 Add a photo to this gallery
Retrieved from "https://muvluv.fandom.com/wiki/Sakaki_Chizuru?oldid=46645"
Community content is available under CC-BY-SA unless otherwise noted.