Start a Wiki
A Re-entry Shell is a specialized vehicle system used to insert objects onto Earth's surface from orbital heights, built to withstand the high velocity and heat of atmospheric re-entry. Its primary component, the Re-entry Cargo Shell, is a multi-purpose orbital insertion vehicle that can store both MRV-type AL warheads and the TSFs of Orbital Divers.

While the Re-entry Cargo Shell as an orbital bombing device is relatively easy to use, delivery of TSFs entails more intricacies; its function is not to ensure the 100% safe delivery of its TSF onto the field; it is to allow the Orbital Diver a chance at reaching the destination, usually just several dozen kilometers away from a Hive, in fighting shape.

As an Orbital Diver delivery system, the Re-entry Cargo Shell houses two Armored Capsules within its, which is also often referred to as the Re-entry Shell itself. The Cargo Shell is laser-proofed up to a certain extent, and can maneuver away from a laser trajectory via a forced Dutch roll. However, as most Cargo Shells accelerate when entering the atmosphere to prevent loss of speed and overexposure to Heavy Laser-class BETA in an airspace area, such a maneuver, or any sort of maneuver other than speeding forward, carries a high risk of the craft tumbling out of control and killing its occupants.

After the initial stage of acceleration, the Cargo Shell will release both Armored Capsules within it and speed up towards its destination; this is part of the entire system's secondary function, which is to impact the Earth before the arrival of the Orbital Divers, killing any nearby BETA and providing small pockets of clear areas for the Divers to land. At this point the Armored Capsules will speed up as well; the acceleration, up to 8.2Gs, is powerful enough to cause tunnel vision, near-blackout and more.

Once the acceleration phase is over, all Capsules are optimized to release their carrying TSF at an altitude of 2 kilometers if no external factors dictate otherwise. Like the Cargo Shell, the capsule will completely fragment into modular components designed to impact the ground before the Orbital Divers to clear a path, which will at this point of time slow down as their TSFs prepare for landing.

During the events of Chicken Divers, Henri Gischen remarks that the official success rate of the Re-entry Shell as a piece of equipment is only 91% because of lowered safety and operability standards for equipment during wartime; for every one hundred divers dropped, nine will most likely die because of equipment failure. This has caused troops to slap the Re-entry Shell system with the unflattering nickname of "Flying Coffin". 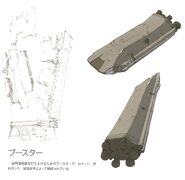 Integral Works art of the Armored Capsule component of the Re-entry Shell system.

Schematics of an Armored Capsule.

Schematic list of the Re-Entry Shell's full system and deployment.

Display showing the effects of a Shell's impact on the ground and Hive monument.
Add a photo to this gallery
Retrieved from "https://muvluv.fandom.com/wiki/Re-entry_Shell?oldid=21106"
Community content is available under CC-BY-SA unless otherwise noted.