Start a Wiki
Naoe Kanna is the main heroine of the side story War Ensemble included with Muv-Luv Alternative Chronicles Episode 4. She was originally a high school student until the BETA invasion of Japan  in 1998, when, together with her high school friends gets drafted as an infantrywoman.

Her friend Yokoyama Sachiko gets killed in combat dies screaming, eaten alive very slowly in graphic detail by a Tank-class BETA shortly after right in front of and she falls in a state of depression. She later on gets recruited by a Mechanized Armoured suit unit squadron led by Sergeant First Class Chiba Haruhito. While serving in that unit she gradually falls in love with him and even suffers a major psychological trauma when she thought that he was killed in combat.

Her name was possibly derived from a 16th-17th century Japanese warlord, Naoe Kanetsugu, who served under the famous Uesugi clan.

In her high school uniform 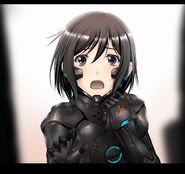 I watched over you when you were sleeping...

Look at that ass 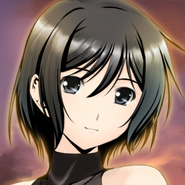 Broken Naoe
Add a photo to this gallery
Retrieved from "https://muvluv.fandom.com/wiki/Naoe_Kanna?oldid=46042"
Community content is available under CC-BY-SA unless otherwise noted.