Mitsurugi Raiden (御剣 雷電) is a side character first mentioned in Muv-Luv Extra. He makes his first actual appearence in a side story featured Muv-Luv Supplement that takes place before the events of Extra.

In Extra, Raiden is indirectly referred to when speaking of the head of the Mitsurugi family. He is the 78th leader of the Mitsurugi and because he is suffering from a disease he is trying to convince Meiya to marry and succeed him.

In Supplement, Raiden appears in one of the short stories included in the fandisk centered around Meiya. He gets knocked out by Meiya moments after making his first appearence. He later gives her her signature katana, Minaru Kamui.

A relative of the Koubuin family, Raiden serves as Meiya's caretaker and guardian. 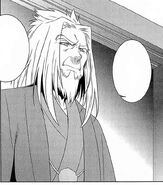 Add a photo to this gallery
Retrieved from "https://muvluv.fandom.com/wiki/Mitsurugi_Raiden?oldid=42885"
Community content is available under CC-BY-SA unless otherwise noted.