Miono Shizuku is a side character that appears in Muv-Luv Unlimited The Day After. Imagine going from idyllic to hellhole on Earth, except over the scant years that you've been a mere mortal; that's the life of Miono Shizuku in a sentence.

The good thing is she's like one of those late-game low-level RPG characters that have massive growth rates for all stats... at least, compared to the rest of the Wardogs, who're all veterans.

Not much is known about Shizuku's life pre-The Day, except that she was the adopted sister of Karen and Takashi Koshino, and lived in the same village featured in Owarinaki Natsu, Towa Naru Shirabe.

The Day After Episode 01Edit

An orphan plucked from her suffering if relatively stable life into IJMDF service, 2nd Lieutenant Miono Shizuku is one of the few in the Muv-Luv multiverse born with natural piloting skills; this means that despite the poor quality of training that post-The Day pilots receive, Shizuku is able to keep up with the more experienced pilots that make up Wardog Squadron.

Being an officer has its perks; Shizuku frequently uses the money to keep the children in her orphanage of origin happy by constantly visiting them and buying outside food for them as opposed to the rations they're given. Despite the horrors she's been through she still has the mindset of a fourteen-year-old girl, and is on good relations with her teammates: Tatsunami Hibiki, Sendou Yuzuka, the mechanic, the head mechanic, and just about everyone else. She is especially close to Ellen Aice, and the two sometimes sleep together for the night, occasionally to Shizuku's massive respiratory discomfort if Ellen relapses into her hugging habits.

Due to the drugs taken by underage eishi commissioned by the IJMDF, permanent damage has been done to her body, which manifests itself as a disrupted menstrual cycle. A deep-seated insecurity about a lack of belonging also resides in her mind due to her origins as a war orphan.

The Day After Episode 02Edit

In The Day After 02, Shizuku is still the upbeat young girl of the team, but after going through a series of simulator matches in preparation of a joint exercise with US Army forces, Tatsunami Hibiki soon discovers that Shizuku has next to no experience with fighting Laser-class, and keeps getting shot down every time she attempts a boosted jump in simulations, rather than following the usual tactics of moving through gaps in the formation of a Destroyer charge.

Despite the training regime she undergoes, she has yet to fully overcome her innate fear of the Laser-class even during the US-Japan joint simulation exercise, which severely affects her confidence. She is also afflicted with worry about her perceived lack of belonging as an orphan, with her meeting and relationship with Ogami Ritsuko making her feel frustrated about being unable to remember her more peaceful days with Ritsuko's friends. However, Shizuku remains a valuable member of Wardog, and true to her skills contributed greatly to the squadron during the Seattle Food Plant Hijack and the 8th Border War between the US/Japanese and French/Canadian forces. 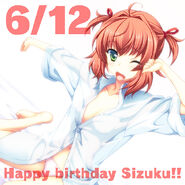 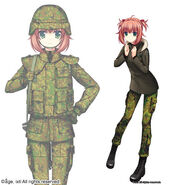 Do they even make fatigues that small?

The power of String is infinite!

Add a photo to this gallery
Retrieved from "https://muvluv.fandom.com/wiki/Miono_Shizuku?oldid=46035"
Community content is available under CC-BY-SA unless otherwise noted.