Melvina, in her UN fatigues.

Melvina, in her UN dress uniform.

Muv-Luv Unlimited The Day After

Melvina Vidya Advani is an Australian of Arab Indian descent, and a 2nd Lieutenant Engineering officer in the Royal Australian Navy. A shrewd person with a mildly negative streak, and armed with surprisingly sharp wit despite her small stature, Melvina is nevertheless a very open person and holds great self-confidence in herself. She especially enjoys making Wilbert D. Collins squirm with verbal traps, and can easily wring extra candy rations out of him. Her tendency to pop out of nowhere never ceases to surprise those around her.

She tends pull no punches when it comes to serious matters, and is especially blunt about issues involving nationality. She carries no bias against the American forces, however, and has no issues with crew interaction with them.

Little is known of Melvina's childhood; her main quality was the knowledge of technical engineering that her parents made sure she got, in order for her to gain citizenship. Some time later, she joined the military, putting the knowledge she gained to good use as a military engineer.

Prior to the G-bombardment of all Hives, Melvina, as a crew member on board the HMAS Sydney, had been sent as a member of the UN Force to supervise the assault on the Hives, carrying with it ample parts that could be re-purposed to build signal relays. Despite the apparent destruction of any Hive hit with a G-bombardment, Melvina had something else to contend with soon after; the Great Ocean Collapse, the series of tsunamis and monster tidal waves that swept warships away like toy boats.

Melvina was one of the crew on board the HMAS Sydney to survive the ocean-wide disaster, and following the sea burial given to the dead crew members of the Australian warship, the HMAS Sydney managed to make contact with the JFK Naval Garrison Base; Melvina became one of a rare few non-US crew members to board a US TSF carrier, as her engineering knowledge was a rare necessity that was needed to manufacture the signal relays used to attempt long-range communication, and which would also result in the eventual rescue of 2nd Lilia Kjellberg by Will and Lieutenant Daryl A. McManus. To that end, she was given permission to use the fabrication facilities on the USS John F. Kennedy, and even allocated a room on the carrier, something which she referred to as "Hotel Kennedy", and she frequently pulled late nights in assisting the carrier's engineers to construct the signal relays.

She was, however, against the idea of building a pool in the JFK Naval Garrison Base, despite the limitless supply of electricity and fresh water the carrier could generate, citing it as something unfitting for the situation.

When Lilia was incorporated into the crew of the JFK Naval Garrison Base, her and Melvina hit off immediately. In the resulting quarrel between Will and Lilia after the commencement of Operation Flying Boom, Melvina intervened and spoke on Lilia's behalf, helping Will to realize that both Will and Lilia were aiming for the same end result, and that his role was to help balance out Lilia's chronic spontaneity. Melvina later participated in the burial ceremony of the dead crew members of the USS John F. Kennedy as well.

During the Defence of the JFK Naval Garrison Base, Melvina had returned to her ship as per emergency requirements, and had ended up doing physical work, much to her chagrin. When the HMAS Sydney was sunk in combat by a Fort-class, Melvina, as well as the crew of the destroyer, went down with it.

During the JFK Hive Operation, Lilia Kjellberg witnessed what remained of Melvina in one of the life-support pods used by the BETA. 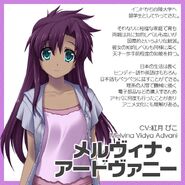 The remains of Melvina inside the JFK Hive. 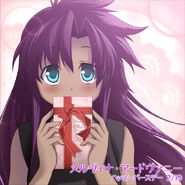 Add a photo to this gallery
Retrieved from "https://muvluv.fandom.com/wiki/Melvina_Vidya_Advani?oldid=46036"
Community content is available under CC-BY-SA unless otherwise noted.