First introduced in The Day After 01, Matsukaze Ryouchi is the Broest of age Bros to grace the franchise yet. Though, that's not saying much since all things considered, one is an NTRing dick, one might've been a girl all along, and so forth.

He's famous for his fucking insane grinface. One of his hobbies is to engage in domestic fisticuffs with Tatsunami Hibiki; no one can really tell who's the lawful victim in these scuffles.

A member of the 1st Tactical Armor Regiment, 2nd Squadron Crane, Ryouichi's callsign is Crane-02. When off-duty, he has a preference for looking up Hibiki for some physical interaction (of the violent kind) with him. Also has a something going on for Sendou Yuzuka, although it never actually goes anywhere.

While his demeanor may seem like a joke, Ryouichi is no slouch in the piloting department.

Ryouichi remains the same old bro he has always been, and apart from his one moment with Hibiki and their Ode To Jinguuji duet, he remains in the background throughout the months leading up to the Seattle Food Plant Hijack.

Ryouichi played a greater part during the latter half of December, being one of the pilots present at the battle to retake the Seattle Food Plant, and is also one of the first Imperial Japanese forces to engage in combat with French/Canadian forces attempting to invade the United States, just one day after the Food Plant incident. Leading several TSFs, and supported by Type-90 MBTs, Ryouichi attempted to stall the French/Canadian forces until the rest of the 1st Tactical Armor Regiment, VMF-318 Black Knives, 66th Tactical Armored Battalion, and other United States/Imperial Japanese reinforcements arrived on the site. 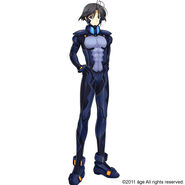 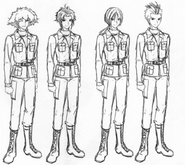 Original Concept art for Matsukaze.
Add a photo to this gallery
Retrieved from "https://muvluv.fandom.com/wiki/Matsukaze_Ryouichi?oldid=45260"
Community content is available under CC-BY-SA unless otherwise noted.