Kouzuki Motoko is the older sister of Kouzuki Yuuko and Kouzuki Mitsuko. She is a doctor, and was responsible for the care and recovery of Suzumiya Haruka after the accident three years ago in Kimi ga Nozomu Eien.

She also appears in the Muv Luv Alternative timeline, specifically in relation to events occurring on Yokohama Base in Muv Luv Alternative Chronicles Resurrection. Motoko plays a major role in supporting her younger sister Yuuko's work in Alternative IV, but prefers to remain behind the scenes either out of preference or necessity regarding the sensitive nature of her work.

Supposedly, she is being held at a secret research lab working on a virus that can wipe out mankind except for those who have the vaccine, which can only be produced using the reactor at Yokohama Base. According to her, she remains on the project because her younger sister is held hostage by Evil Tactical Genius Yuuko, who plans to rule the world by using the virus as the stick to the carrot of the Alt 4 technologies such as railguns.

And no, she did not create the 6 billion Euro man. She wanted to use him to let the world know about the "evil plans" of Yuuko though.

The real reason for her presence at Yokohama Base is most likely because of her profession as a neurosurgeon. She is highly skilled and as such would be an integral part of the team creating the actual 00 Unit(s).

Rest assured, you WILL suffer. 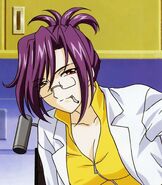 Doesn't she know not to smoke in a hospital?
Add a photo to this gallery
Retrieved from "https://muvluv.fandom.com/wiki/Kouzuki_Motoko?oldid=46013"
Community content is available under CC-BY-SA unless otherwise noted.