Start a Wiki
Inia Sestina is one of the main characters featured in media related to Muv-Luv Alternative Total Eclipse series.

Along with Cryska Barchenowa, Inia is one of the feared Scarlet Twins of the Soviet Union's Idol Test Flight. She is a subordinate of Jerzy Sandek, a primary proponent of both Alternative III and the Total Eclipse plan. Operating the tandem-seat Su-37UB Terminator with Cryska, their combined ability allowed them to overwhelm the pilots of other countries, but despite the violent nature of combat, she remained immature in appearance and behaviour. Having been partnered with her since she was young, Inia trusted Cryska as an older sister; the two people Inia recognized as family were Cryska and Misha, her teddy bear doll. She could often be seen wandering around Yukon Base, with Misha in tow. She is a twin sister to Yashiro Kasumi, as they both came from the Sestina generation of Espers.

Being an ESPer, Inia has the ability to read people's thoughts and interpret their inner feelings. As such, she does not get along well with many people besides Cryska, Yuuya Bridges, and Takamura Yui: all of whom she has read and enjoyed their thoughts the most. Throughout her stay in Yukon Base, Inia remained relatively uninvolved in the main scheme of events unless it involved the aforementioned three people, and tried to spend time with Yuuya whenever she saw him.

After meeting him the first time, Inia developed a great interest in Yuuya that she was unable to explain, even to a fellow Esper like Cryska. The "colors" she saw in his mind were interesting to her, and the inner turmoil of his past and the effect they had on his emotions sparked something in Inia. This attraction caused her partner Cryska to become concerned over Inia's safety with a person she didn't trust, and yet Cryska herself began to experience her own share of feelings for Yuuya thanks in large part to her psychic link with Inia. Both directly and indirectly, Inia helped draw the two of them together.

When she piloted a TSF, Inia's childish personality somehow remained despite the serious nature of her duties; in the company of Cryska, Inia often expressed a preference for close-combat, and considered using Assault Cannons "boring". With a few exceptions, however, Inia's piloting (when alone) is generally above average, which could be witnessed with her performance during the Yukon Base Attack and her rescue of Yuuya while she was alone in the Su-37, having been separated from Cryska during the chaos of the battle. Her psychic abilities, like those of Cryska, can be enhanced by a condition known as Prafka, which also has the result of drastically changing her personality into something more aggressive.

During the Yukon Base Incident, Inia's abilities were enhanced to a far greater degree than before through the use of an Esper control pod artificially inducing Prafka, which then proceeded to take control over her and Cryska and caused them to fight both friend and foe. She later lasped into a comatose state as a result of voluntarily breaking free from the other Esper's control, in order to prevent herself from killing Yuuya.

Later, she would escape with Yuuya and Cryska when they decided to leave Yukon Base before Cryska could be killed. She and Yuuya would mourn Cryska together after her death, and together they would both pilot the Shiranui Phase 03 during the assault on the Evensk hive. Late in the battle, Inia was knocked unconscious by a nearby Esper control pod when it attempted to artificially induce Prafka but failed.

Inia would later awaken when Cryska's ghost manifested itself from their psychic link and participated in the final assault on the Laser Fort-class with Yuuya leading the remaining Esper-controlled Su-47s into battle.

Inia is confirmed to have survived the BETA wars by Alternative's epilogue and Exogularity. 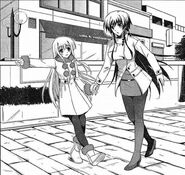 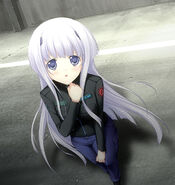 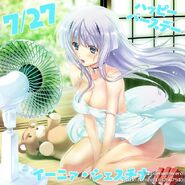 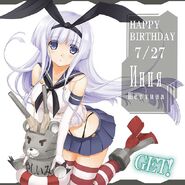 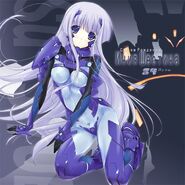 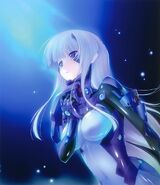 Add a photo to this gallery
Retrieved from "https://muvluv.fandom.com/wiki/Inia_Sestina?oldid=45998"
Community content is available under CC-BY-SA unless otherwise noted.