Haiburu is a gag manga, told in the 4-Koma format, starring anthropomorphized BETA that began serialization in Dengeki Muv-Luv's first issue. Drawn by Izumi Minami. Additional chapters have appeared in the manuals for the TE anime Bluray discs, and the fourth volume of Muv-Luv Alternative Chronicles featured a Haiburu animated short.

Somebody doesn't wanna get CHOMPED... 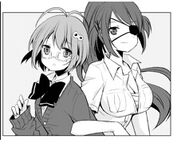 Not someone you'd want to Grapple with...

You could just CHOMP her up!

still somebody you wouldn't wanna grapple with