A mysterious figure that first appeared in the TDA01 OP.

The very short shot is composed of the figure taking a step, then the camera quickly pans upward revealing blue UN BDU pants, a bare arm, and when the camera gets to where the person's face would be, it's darkened and blurred to hide the identity of the figure.

Based on other, rather circumstantial evidence in the OP such as the previous shot lining up to be the same as an implied shot of Takeru's end in the Unlimited Manga, art style matching with that of Bou, rather than the other age artists, and shape and color of the hair from the shot, and the fact that the character was wearing UN garb, has lead some to the conclusion that Desert Guy is none other than Shirogane Takeru as he is in the Unlimited: The Day After World. This is also supported by Major Jinguuji's tearful closing line in TDA01 - "Shirogane...". Her rememberance of him means he still exists in that world and hasn't died or leapt to a new loop.

Other proposed candidates for the identiy of Desert Guy include, but are not limited to:

Other Images of Desert GuyEdit

What appears to be Desert Guy's arm.

Most of Desert Guy's head and face

The shot from the TDA01 OP immediately before Desert Guy's appearance. 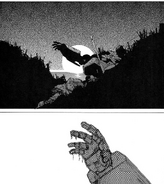 The Corresponding shot to the previous image from the Unlimited Manga which is very heavily implied to be Takeru
Add a photo to this gallery
Retrieved from "https://muvluv.fandom.com/wiki/Desert_Guy?oldid=25753"
Community content is available under CC-BY-SA unless otherwise noted.